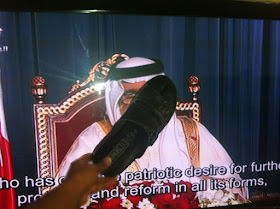 King Hamad graced Bahraini viewers yesterday with an address announcing various constitutional amendments. It would be wrong to use the standard adjective "much-anticipated" to describe the speech, for few were expecting much of anything by way of actual political reform. As it turns out, the king did not go even this far, failing altogether to acknowledge the actual demands of the opposition. Instead, the new measures stem (solely, as far as I can tell) from the recommendations of this summer's farcical National Dialogue that readers may have happily forgotten about until now, giving the impression that King Hamad is still living in August 2011. How long does it take to draft a royal decree in an absolute monarchy? This is Bahrain we're talking about; it's not like the amendments had to pass through seven congressional subcommittees.

In any case, most if not all of these are procedural changes regarding the lower house of parliament, usefully summarized in this Gulf News article:

The trick, of course, is that these "reforms" are of little consequence to al-Wifaq, since the composition of Bahrain's electoral districts--which are hopelessly gerrymandered around Sunni-Shi'i lines--precludes the opposition ever gaining a majority in parliament, and thus from exerting its political will over the lawmaking body. Sure, it can initiate the questioning of ministers and so on, but it can always be defeated by a concerted pro-government majority. Obviously, it goes without saying that such legislative amendments matter still less to those in the youth movement who continue to wage nightly street battles with security forces.

The New York Times' coverage of the speech carries the euphemistic (or perhaps merely understated) title: "Bahrain Opposition Says King’s Measures Fall Short." In fact, one may get a sense of the opposition's opinion by the graphic at the top of this post, taken from a Bahrain Mirror story titled "The King's Speech and the War of Attrition." The conclusion of the latter article, which seems to me a good one, is that hope must now rapidly fade among those who until now have continued in the unlikely belief that Bahrain's rulers would one day wake up ready for a grand bargain with the opposition. Al-Wifaq, which so far has seemed to number among the latter camp, may finally be waking up itself. A statement (English, Arabic) issued immediately after the speech is introduced thus:

A statement issued by al-Wefaq National Society in Bahrain underlined that the King's speech of on Sunday, January 15th had nothing to do with the political crisis, and was nothing but an escape from the crisis plaguing the country for the last ten month. ... [I]t is very far from the demands of the Bahraini people who have took to the streets for months to demand democratic transformation and to reject the dictatorship.

That the speech--in the words of the New York Times--"fell short," then, does not even begin to describe the matter. The more fundamental objection is that alluded to in the title of the Bahrain Mirror piece: the fact that Bahrain's rulers refuse even to recognize the actual demands of the opposition, speaking as if they were not even aware of them. Indeed, it is as if one complaining of a dilapidated house to his negligent landlord was answered, "Well, how about we replace all of the doorknobs for you?" This is the "war of attrition" of which the article speaks, and which is truly an apt description for the state's current non-reform reform strategy.

Is the opposition demanding basic changes to the electoral system and the composition of the government? No matter, offer instead some secondary constitutional amendments to the workings of the toothless parliament. Indicted on charges of torture and excessive force by an international panel of war crimes experts whose recommendations include substantive initiatives to ease underlying social and political tensions? No problem, hire some new police advisers from the United States and Britain and ignore entirely the bit about holding police and government officials responsible--and for that matter the bit about not torturing people. In short: whatever happens, hear what you want to hear, and act accordingly.

Update: The GDN has an update on the gang-style violence gripping the south of Hamad Town and Dar Kulaib in recent weeks. The MP from the area is calling upon the government to resign for its inaction.

Also, since his high-profile beating last weekend it seems Nabeel Rajab is positioning himself as a more visible opposition leader, going after King Hamad directly in this candid speech (with English translation) on Thursday in which he attempts to give new direction to the opposition movement.

Update 2: And the Ludo Hood saga continues! New "evidence" has come to light that exposes the link between the U.S. Embassy and Iran. Clearly this evidence does not include the fact that the latter two countries have been on the verge of open warfare for several weeks.


Update 3: Not to be outdone by the likes of Alec Baldwin, Sh. Khalid directs his Ministry of Foreign Affairs to stop official use of Bahrain's national carrier Gulf Air after a paying customer is given his preferred 1A seat on a trip back from Malaysia. Awwwwww. But seriously: anyone else surprised that he only needs 1A?

Update 4: The National Unity Gathering offshoot Al-Fateh Youth Union held another rally this weekend at which it rejected the government's "reconciliation document" meant to provide a roadmap for Sunni-Shii rapprochement (as if that were even likely). Al-Zayani writes in Al-Watan,

How can we expect people to reconcile while arson and terrorism is ravaging the streets? Can’t you hear the instigation disseminated from rostrums and by terrorist parties? I don’t wish that you suffer Molotov attack to realize the amount of terror and gravity of the wounds of the people you are asking to reconcile.

The reconciliation document is an elitist one. We may not care who signs it and no one can oblige people to abide by this document as long as Bahrain is being set ablaze on a daily basis. Some people sign for certain interests or wish to be called “the reconciliation man” while terrorism continues unabated.

Al-Zayani also seems to allude to the group's fear that its weekly Friday rallies may be starting to wear on government patience. He writes,

Every Friday, Al-Fateh Awakening Gathering increases in number and gathers momentum as its message grows more powerful. We hope this gathering will keep being authorized in the future. As long as they abide by the rules, the participants will remain beyond reproach. Some may argue that the state turns a blind eye to the unlicensed assemblies in other places.

We don’t want this to happen to those who want to see the law enforced on all. Getting a license is mandatory. Failure to enforce the law gave birth to another strong assembly in another street. Had the state enforced the law, those people who do not terrorize, kill and burn Bahrain wouldn’t have taken to the streets.

On this issue of post-uprising Sunni mobilization in Bahrain I have an upcoming article for the Middle East Research and Information Project (MERIP), which should be out soon.
Justin Gengler at 8:19 AM
Share