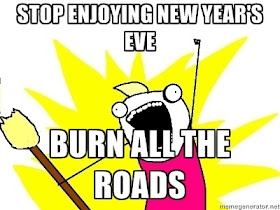 Putting an early end to hopes that the new year in Bahrain may be more propitious than the old one, 2012 has picked up immediately where 2011 left off: with the death of another young protester (or "vandal," according to the Ministry of Interior) after the 15 year-old was bludgeoned with a tear gas canister. Following an ("authorized") al-Wifaq rally on Friday that turned into an (unauthorized) sit-in on al-Budaiyi' Road, Saturday witnessed what the Washington Post calls the "most widespread protests for months."

'Abdallah al-Dirazi, however, remains undaunted (perhaps because he's been reinstated at the University of Bahrain since being forced out of the Bahrain Human Rights Society after joining the king's BICI follow-up commission):

"I think it is important to look at 2012 positively considering that 2011 had been a tough year not only for Bahrain but also the region," he told the GDN.

"Change is inevitable for an open democracy which I feel Bahrain is adopting by reinforcing practical measures as we head into 2012."

Among these "reinforcing practical measures" is the launching of a new website to advertise ... these "reinforcing practical measures." Indeed, one can always be sure that Bahrain has taken another step toward democracy when a new website appears to explain what that step is. This newest one is located at http://www.govactions.bh and is no doubt the work of the media wizards at some Western PR firm or another. The very name implies that "the government" is taking "actions"--in this case, BICI follow-up actions--while the site itself defaults not coincidentally to an English-language version. (And I am in Qatar so it's not simply because I am accessing it from a Western country.) 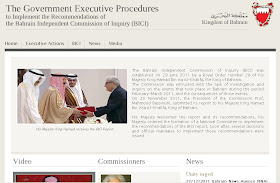 The launching of the website comes at a useful time for the government, since contrary to its name, the number and substance of the "actions" taken in the wake of the BICI report remain limited. In keeping with Bahrain's police "reform" (as opposed to, say, political reform) agenda, it was announced on Sunday that five officers would go on trial next month for their alleged roles in the death of a detainee. But, again, political changes beyond those involving the security services we have not seen.

Moreover, the head of the post-BICI commission appointed by the king--the very commission whose work is being touted by the govactions.bh website--has just resigned following what he called "'unjust' accusations targeting his honour, dignity and judgment." He had faced heavy criticism from pro-government Sunnis after he reinstated four council members dismissed during the crackdown. This episode leads nicely into a discussion of the main subject of this post: why we should expect 2012 to be a lot like 2011 in Bahrain.

The Counter-revolution Continues
The resignation of 'Ali al-Salah from the king's follow-up commission is but the most recent indication of the ever-widening social gap that continues to divide Bahraini society, and to shape perceptions of and actions in response to government policy. Any perceived leniency in dealing with "criminals" and "traitors" will meet with swift condemnation from a not insignificant faction of Sunni citizens affiliated with conservatives within the ruling tribe. To be sure, if neither the crown prince nor King Hamad himself was able to avoid such popular blow-back in response to positions seen as overly-conciliatory, what hope is there for mere mortals such as 'Ali al-Salah? By rooting out individuals who appear willing to compromise, such vigorous self-policing among Bahraini Sunnis complicates any potential political solution involving the state and opposition--whether in 2011 or in 2012.

The Original Revolution Continues--More Violently
As Bahrain approaches the one-year anniversary of the February uprising, neither the formal opposition in al-Wifaq et al., nor the youth-dominated street movement, shows signs of losing interest in pursuing fundamental political change. Indeed, February 14, 2012, will carry more symbolism even than the same date in 2011, as it marks simultaneously the one-year anniversary of mass protests as well as the ten-year anniversary of Bahrain's 2002 Constitution, promulgated unilaterally by King Hamad and, for protesters, symptomatic of the latter's aborted political reform project promised at the outset of his ascension.

Not only does the protest movement continue, then, but the informal opposition represented by various localized groupings of youth has grown increasingly violent in its tactics, having moved from peaceful demonstrations, to indirect acts of violence such as road sabotage with oil and nails, and now to direct acts of violence against security personnel using Molotov cocktails. Opposition forums are rife with instructions how to make and improve them.

And a disturbing video disseminated by the "Nuwaidrat Youth" documents their effective use in a deliberate and coordinated attack on riot police vehicles in Nuwaidrat.

Friday, December 30 also saw the first American flag-burning (at least that I've seen) since the start of protests, demonstrating mounting frustration at American policy towards Bahrain and its "support for Al Mahmud and the ruling Al Khalifa gang." While government opponents in Syria have begun burning Russian flags for that country's veto in the UN Security Council of resolutions against al-Assad, Bahrainis in Sitra now refer to the "Great Satan."

The forum thread advertising the video is full of rebukes from other members advising these youths not to "pollute their movement" with these sorts of actions; and, more generally, the formal opposition has publicly called for protesters to stop their use of Molotov cocktails and other instruments of violence. Yet the sway of 'Ali Salman has never extended to all of the opposition--and to Nuwaidrat, the hometown of Sh. 'Abd al-Wahhab Hussain and his al-Wafa' Movement, perhaps least of all. The coming of 2012 is not likely to change this.

Finally, the recent violent turn of some protesters will serve inevitably to prolong the current crisis not only by "keeping the revolution alive," so to speak, but more importantly by giving the state an excuse to continue its current course of action, which may be justified more easily with every YouTube video of riot police being ambushed by black-clad thugs. "How are we to negotiate with an opposition such as this?" the government will ask. "What sort of 'democracy' would we expect to find if such people will given more political power?" For officials in the State Department and even more so the Pentagon, to say that these youth groups are not representative of the larger Bahraini opposition will not be a satisfying response.

Regional Politics
If you didn't know what the Straight of Hormuz was prior to this week, chances are you do now. As elegantly depicted by Time Magazine last week in a well-circulated article by Mark Thompson, the strategic passageway is here: 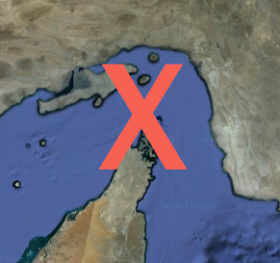 Thanks for that, Time.

In any case, if you thought that U.S. government support for the Al Khalifa was staunch before Iran threatened to block the passage of a third of the world's oil and send prices to $200/barrel, then wait 'til you see it afterward. Oh, and did I mention the U.S. flag burning in Sitra?

Certainly, the U.S. has an intrinsic interest in seeing an end to the political stalemate in Bahrain, if not for its own sake then because it removes a primary source of instability affecting the entire region. But the centrality of Fifth Fleet assets in containing (and possibly confronting) any Iranian naval operations in the Gulf leaves the United States with little leverage--and perhaps little will--to press for the sort of basic changes to the Bahraini political system that the opposition continues to demand. An unprovoked Iranian attack on Bahrain is almost unthinkable with or without the U.S. navy base; indeed, insofar as the latter will be a prime target in the event of any hostilities, it probably serves to increase rather than decrease the likelihood of being involved in a regional conflict. Today, the U.S. needs Bahrain at least as much as Bahrain needs the U.S.

The Economy
Any desire to solve the government-opposition standoff must therefore originate from Bahrain's rulers themselves, and the only cause that might conceivably spur such a desire (discounting for the sake of argument the opposition's ability to reinvigorate large-scale protests) is the threat of total economic collapse. The problem here is not so much that the state would run out of money--for oil prices remain high, and in any case the Saudis can fill any fiscal shortfall--but that nominally pro-government citizens begin to feel the economic pinch at the individual level such that they begin collectively to rethink the wisdom of the government's political strategy. (On the relationship between economic satisfaction and political orientation among Bahraini Sunnis compared to Shi'a, see this post.)

While the uprising did no good for the Bahraini economy, and although a few institutions have relocated elsewhere, there has yet to be a foreign exodus from Bahrain such that might inflict irreparable damage. Even if that were to change, though, Sunni tolerance for economic hardship will be conditioned by the regime's relative success in cultivating its sectarian doomsday scenario: "If you oppose us, and the opposition takes over, you will be longing for the days of the Al Khalifa--good economy or no."

Update: this update from The Independent on the continuing intra-Al Khalifa struggle for power represents yet another reason why 2012 will be a lot like 2011 in Bahrain.

Update 2: In today's segment of "Bahrain panel news," it seems that 'Ali Al-Salah has had a change of heart and has withdrawn his resignation from the king's BICI follow-up panel. More like his resignation was rejected.

Further, the BNA has announced the creation of a new "judicial panel" to review "some" post-crackdown Security Court verdicts, but only those "nonappealable convictions pertaining to the freedom of expression" and "not those related to incitement of violence." Which is to say: "Whichever ones we feel like reviewing."

Update 3: In the Mideast Channel, a profile and discussion of Bahrain's nebulous "February 14th coalition," by Toby Jones and Ala'a Shehabi.

Update 4: Remember those Washington Times op-eds (including one "written by" King Hamad) defending the Bahraini government and its crackdown? It turns out that you can thank Lockheed Martin and the ad wizards at Sanitas for those. See Justin Elliot's report in Salon.
Justin Gengler at 8:29 AM
Share