How About That Police Reform? 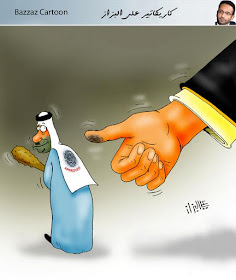 As for the issue of torture while in detention, Amnesty International reports a new case alleged by an 18-year old student. And of excessive force we received a new display this weekend when al-Wifaq yet again spurned Ministry of Interior orders and held its weekly Friday rally near its headquarters, which not conveniently for motorists is directly adjacent to Sh. Salman Highway. Though riot police stopped demonstrators from actually making it that far, the Washington Post reports that a few thousand people braved the lack of permit to join the rally, which in any case ended without anyone being bludgeoned with a tear-gas canister, which is a bonus.

Less peaceful was what happened to another march on Friday night, one presumably unrelated to the al-Wifaq rally, in which the Bahraini government's favorite human rights activist Nabeel Rajab ended up face down in the street after riot police confronted in a narrow alleyway the group of demonstrators he was leading through what seems to be the Manama Suq. Though the cameraman takes off running once police start charging forward, the minute or so leading up to this episode has been recorded for posterity on the Intertubes:

The Ministry of Interior is vigorously denying Rajab's claims to have been beaten, saying police found him on the ground and "helped him" get up and eventually to go to the hospital. This is not unlike the MOI's claims a few months ago that buckshot extracted from protesters didn't match that used by riot police. For its part, the U.S. Embassy is already calling for an investigation.

Yet whether or not Rajab was attacked in this case is largely beside the point. In the first place, this would not be the first time he has been the target of overzealous policing. His BCHR has recorded a long history of attacks/harassment perpetrated against his home, family, etc. dating back to 2005. More importantly, however, the larger issue is not the plight of one Bahraini activist but the conduct of Bahrain's supposedly-"reformed" security services in the face of continuing protests, protests which seem only to be increasing in boldness as they are dealt with more harshly. 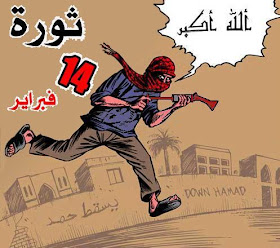 (Don't ask me what this guy is supposed to be carrying.)
In short, rather than actual political changes that might alleviate the country's underlying political conflict, the Bahraini government has attempted to make the argument that the main lesson of the BICI report--and the primary "reform" demanded by its conclusions--is the retraining and restructuring of its police and security forces. Such an attempt to address the symptoms of Bahrain's political conflict rather than its causes was already an obvious step in the wrong direction. But now, when it's become clear not only that (1) Bahrain's rulers continue to avoid substantive political reforms by focusing on secondary issues; but also that (2) even those secondary, police-related reforms supposedly initiated are also illusory, now the smoke of obfuscation has finally cleared. The Bahrain of February 2012 is fundamentally the same Bahrain of February 2011.

Among the results of this continued post-BICI stagnation, two have become increasingly apparent lately. The first of these is a disturbing trend of militia-ization, not only among Sunni supporters of the regime but also among Shi'a, the latter invoking a right to self-defense in the face of both government thugs and official security services. The issue of Sunni militias has been an issue since the sectarian confrontations of April and May, and more recently with the creation of 'Adel Flaifel's new "Military Society," which was involved in last month's 'Ashura' clash in Muharraq.

Since then, the problem has apparently augmented enough to warrant a letter on Saturday from 'Ali Salman to King Hamad complaining that "the residents of Dar Kulaib [in the far south of Hamad Town] adjacent to al-Safriyah Palace are being exposed to attacks by groups of armed civilians under the protection of the security forces, suggesting coordination and collusion between security forces and the militias." He continues that the "nightly" attacks and the "failure of the security forces in their role of deterring the militias" leaves residents no other choice but to appeal to the protection from international organizations. 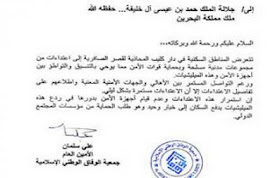 Outside of Dar Kulaib, moreover, Shi'a villagers across Bahrain have begun a coordinated campaign to "defend" Shi'i mosques, in order to protect them from the fate of the 38 others destroyed during the crackdown. The Islamic Ulama' Council has even produced a nice-looking electronic flier to that effect: 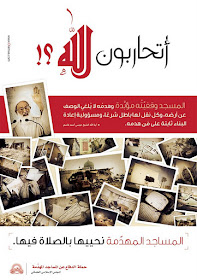 Over the weekend 'Ali Salman, 'Isa Qasim, and others turned out for a group prayer/vigil at the site of one of the destroyed mosques, under the slogan "Mosques Are a Read Line!" 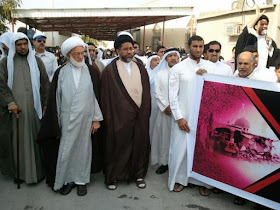 While obviously not a militia in the sense of Flaifel's organization, the organization of communities for the purposes of group defense is not too far removed.

Beyond this "militia-zation," the second effect of the post-BICI lack of political progress is an increasing anti-U.S. sentiment, not merely among pro-regime Sunnis, which in any case is not a new development, but also among Shi'a activists increasingly frustrated with a seeming lack of U.S. interest in resolving Bahrain's political impasse. As for the first group, we need look no further than Saturday's subtly-titled offering from friend of this blog Yusif Al Bin Khalil: 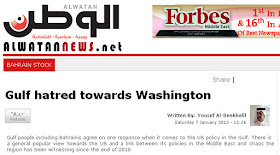 The only way Bahrain is to rid itself of a predatory and capricious U.S. Mideast policy, he writes, is to join together with other Gulf states in a new GCC-based security architecture that circumvents the U.S. entirely. And since he admits that "[w]e don't expect the confederation to be founded within a year but it takes time," he suggests in the meantime that "a kind of regional integration between Manama and Riyadh as a first step to found the Gulf Confederation may be a genius idea." Indeed, I say! A capital idea! Wait, so Manama and Riyadh are not already one and the same?

More notable than Al Bin Khalil's Arab Gulf Nationalism, though, is the recent anti-American turn of (some of) the folks at February 14. A group called the "February 14 Freedom Movement" has called for Bahrain-wide U.S. flag-burning over the last two weekends, along with an explanatory communiqué. Since this is only the group's third released "statement," I assume it must be fairly new. 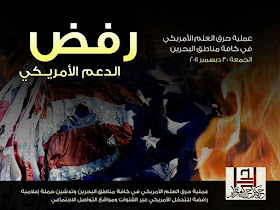 In any case, the manifesto reads in part (sic):

And since no flag-burning is complete without photo evidence: 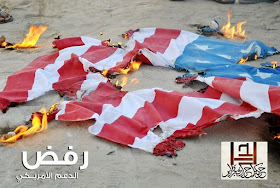 And the dreaded flag-stomping! I guess the February 14 Freedom people don't mind wearing U.S. Crocs while stomping the U.S. flag.--or at least a bad reproduction of it. How many stars does that one have--15? 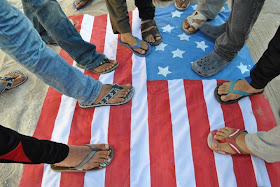 While the flag-burning events has earned much criticism even among supporters of the youth movement--the opposition forum thread announcing the "statement" has reached an impressive 18 pages of argument between those for and against--the feeling of U.S. culpability in Bahrain's lack of political progress is doubtless increasing. This is particularly so as the BICI initiative--back when that still seemed likely to bring some good--was widely assumed to have come in part at U.S. insistence or prodding, a position later supported by the suspension of the arms sale until after its findings were made public.

Since the report's publication, however, the only real sign that the U.S. remained at all active in Bahrain was a negative: a report that Bahrain's Foreign Minister had turned down the offer of an unnamed U.S. diplomat to try to mediate an end to the crisis. More recently (as in two days ago), Lebanon's Al-Akhbar reported on "A U.S.-Qatari plan to solve the Bahrain situation," one that supposedly includes provisions for change to a single electoral district, election of some ministers, and so on. Yet it's difficult to foresee the Al Khalifa signing off on anything remotely approaching that deal.

The State Department seems to want to give the impression at least that it is engaged in closed-door wrangling and mediating; all the while the situation on the ground continues to deteriorate. Indeed, it is telling that the first strong Embassy reaction to any of the post-BICI violence--which has included the deaths of several protesters--has occurred only now after the injury of Nabeel Rajab, for which it now wants an investigation.

Here's one: how about an investigation into the lack of government follow-up on any of the substantive political (and for that matter social) recommendations of the BICI report?

Update: Funny how the Bahraini majlis al-nuwab doesn't look quite so pro-government when it's got other concerns than just keeping al-Wifaq in line. Here's a video showing one former Al-Asalah MP, Usama Mihna al-Tamimi, accusing the prime minister of being a land "thief" and the ruling family of "taking 50% of Bahrain's land while denying its original citizens adequate housing" while speaking in 'Isa Town. Sounds about right.

Update 2: Oops! The Bahrain News Agency accidentally publishes an article calling for more Shi'i mosque demolitions. Hilarity ensues before it is finally pulled from the website.

Update 3: Two security court death sentences have been overturned by one of the civilian appeals courts setup recently.

And while Bahrain remains unable to afford public housing for people who've been on waiting lists for some 25 years, $3 million in jewelry gifts to a low-ranking British royal is no problem. Just imagine what Kate Middleton would get!

What some people are doing today does not please the people of Bahrain, nor does it please the Lord of mankind. Today, we do not accept criticizing the military court, and we do not accept challenging its integrity, honor, honesty and patriotism. He who says that the judiciary has a sanctity and high position should not challenge it.

The military court was fair and honest and worked in difficult and harsh circumstances; only the honorable patriotic men can take such a stance. The honorable man, Mr. Minister of Justice, has to say the right word about the impartiality of the military court and should not accept that it be abused or challenged.

Update 6: Police reform indeed. Three more deaths over the weekend: one from self-immolation by a mother whose son was arrested in April; one from tear-gas inhalation from a shot fired into a home; and one in which a youth who had gone missing (i.e., was arrested) was later found among the rocks on the coast of the Amwaj Islands with apparent signs of torture.

The Ministry of Interior is chalking the first and last cases up to "psychological problems" among both victims. Yeah, psychological problems like having your son, elderly husband, and neighbors beaten in front of you. The BCHR's description of the woman who lit herself on fire on her own rooftop:

Badriya Ali is a 59 year old woman from Sanabis. In April security forces raided Badriya Ali's home to arrest her son, Ahmed Mushaima, who is 25 years old. They beat him severely in front of her, banging his head against the corner of an air conditioner repeatedly. Badriya screamed at them to stop beating her son, and an officer responded "shut up, we arrest women too." They then pulled her old sick husband from bed to arrest him, but he was too weak and fell to the ground, where they left him. Badreya fainted after watching her son being severely beaten. Before leaving, the officers wrote "long live khalifa" on the walls of her home.